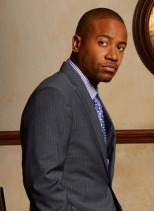 Harrison could exist off his charm, his looks, his taste in shoes. But there’s a depth of skills that make him an invaluable member of Olivia’s team. His memory and attention to detail are exceptional and serve him well when he’s doing either detective stuff or attorney stuff. But even more importantly, the guy can talk. Like a great salesman he can break you down and build you up before you’ve even had a chance to get a word in edgewise. That mouth can also get him into big trouble. And if Olivia hadn’t come along, he’d still be knee deep in it. 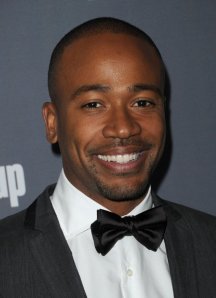 Columbus Keith Short, Jr. was born in Kansas City, Missouri. At the age of three he began entertaining by putting on shows for his family. In his early teens, Short appeared in various television commercials and, when he was a senior at Orange County School of the Arts, was offered a part in Broadway’s famed show STOMP! He then went on to choreograph Birtney Spears’ In the Zone tour, launching his entertainment career.

Short started his acting career starring in the 2006 releases, Save the Last Dance: 2 and Accepted, opposite Jonah Hill and Justin Long. In 2007 he had an arc on Aaron Sorkin’s critically praised showbiz drama, Studio 60 on the Sunset Strip, as Darius. Later that year his acting career took off when he landed the lead role as DJ in the Screen Gem film, Stomp the Yard, which was No. 1 at the box office. In addition he starred in This Christmas, alongside Idris Elba, Regina King and Chris Brown.

In 2008 Short starred in Darnell Martin’s Cadillac Records, opposite Beyoncé Knowles, Jeffrey Wright and Adrien Brody, as the young and talented but self-destructive harp player and singer, Little Walter. He went on to receive the NAACP Image Award for Best Supporting Actor in a Motion Picture for this role, legitimizing his abilities not only as an actor, but as a musician too. Short has gone on to work with award-winning producers the Avila Brothers on his much anticipated album entitled Act One: Dimes and Dolls. He also plays the bass, piano and drums.

In addition to his success in dramas, comedies and in music, Short also starred in the action flick Armored, opposite Matt Dillon and Laurence Fisbourne. He then went on to star alongside Kate Beckinsale in Dark Castle’s adaption of the comic book Whiteout, a thriller released in 2009. Additional film credits include The Losers, Death at a Funeral and Stomp the Yard 2: Homecoming.

Short also has a passion for writing and producing television and film. He executive produced Stomp the Yard 2: Homecoming and Strange Fruit through his production company, Great Picture Show Productions.

He currently resides in Los Angeles.

Who Am I? – Columbus Short (courtesy of KerryWashington.com)

“Who Am I?” is an acting tool that Kerry Washington uses during the creative process of developing a character by using this list of questions as a way of discovering new things about the character. Washington has asked fellow actors to answer the same questions as a fun way for us to learn more about them! 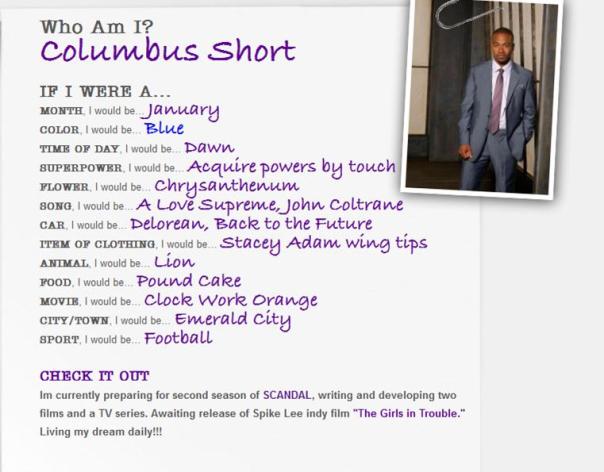 For more information on Columbus Short