Episode 4 – “Enemy of the State” (recap courtesy of ABC.com) 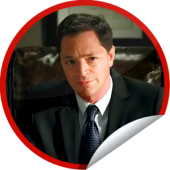 SUMMARY — There’s an army in the offices of Olivia Pope & Associates. And when we say “army,” we’re talking literally. They are the men assigned to protect General Benicio Florez, a brutal South American dictator. The guy is a sworn enemy of the U.S. who is in town for an annual conference. He’s in the office because someone has kidnapped his wife and children. Only Olivia Pope can help him. Unfortunately, she’s not exactly at the top of her game after learning that Amanda Tanner is carrying the president’s baby.

The general’s oldest son was a witness to the kidnapping, but the team believes he’s not being completely truthful about all that happened. Huck tracks down the younger son’s computer game to locate the rest of the family. They are at a women’s shelter. Florez’s wife, Carolina, wasn’t kidnapped. She ran to escape from the clutches of her dictator husband. Abby doesn’t want to return this frightened woman to the general, so she checks her and the kids into a hotel. She then lies to Olivia in order to keep this secret.

Abby is shocked when she sees Carolina and her kids in the office the next day. Olivia explains to General Florez that kidnappers must have lost their nerve. More lies. Abby later screams that when she was beaten by her ex-husband, Olivia broke the guy’s kneecaps with a tire iron. The general’s wife needs help from a gladiator, too. It’s just the wakeup call Olivia needs. She tries to sneak Carolina away while her husband is occupied. Unfortunately, the general returns before they can get away. Florez will let Carolina leave, but the kids stay with him. Things just got worse.

Olivia meets up with General Florez as he’s preparing to return to his own country. She assures him that Carolina is not going away. She will strike back by writing memoirs and talking about women’s rights in the developing world. She’ll become a hero who will inspire others to rise up and fight. If the general wants to survive politically in the future, he should reconsider taking his children away from their mother. Florez does just that. Looks like the gladiator is back.

Cyrus lets Olivia know that they’ll pay $10 million, but Amanda Tanner doesn’t want money. She wants to keep her baby. She also wants to tell the world what the president did. As for Cyrus, he’s hired a team to dig up as much dirt possible on Olivia and everyone else in her office. When Billy Chambers clues her in as to what’s happening at the White House, Olivia calls Cyrus to let him know they plan to have a chat with Diane Sawyer. She’s putting up a brave front, but she’s legitimately scared.

After Amanda is prepped by the team for the storm that’s headed their way, she makes a phone call. She says, “I’m done, I can’t do this anymore. I can’t lie anymore. I’m out. I’m gonna tell them the truth…” We’re now asking ourselves a couple of questions. Who is on the other end of the line? And what exactly is “the truth?”

Harrison catches Quinn getting chummy with Gideon at a bar. He advises her to shut down this budding relationship because there will come a time when she’ll have to lie to him. Quinn is a terrible liar. Gideon claims he has another source, so dating wouldn’t be a conflict of interest for him. He also digs up old video footage of the president sharing a moment with Amanda. In the middle of a make-out session with Quinn, Gideon asks if Amanda Tanner was sleeping with the president. The moment Harrison predicted about has just arrived. We’re just wondering if Gideon buys Quinn’s deflecting reply.

U.S. Attorney David has been pleading with Olivia to help him save his favorite DC newsstand from ruthless developers. His timing to ask for a favor couldn’t be worse. But at the end of the day, David gets his wish. Harrison informs him that the newsstand will be saved. It’s Olivia’s way of apologizing for blowing him off earlier.

Cyrus lets the president know that Amanda is pregnant. He then goes off on a rambling, yet eloquent, speech of what the future holds. It isn’t pretty. Fitz has never seen Cyrus like this. He contemplates giving it all up. It’s a plan Mellie coldly rejects. Later, Fitz gives a stirring speech at the annual assembly. He seems reenergized. He later lets his chief-of-staff know that their real problem is Olivia Pope.

Cyrus lets Olivia know that the President of the United States has declared war on her. Olivia briefs her staff on this latest turn of events. She gives them all an out. Not one person takes it. They are all in when it comes to Amanda Tanner, who is suddenly in danger. A gloved hand covers her mouth inside her apartment. The intruder plunges a syringe between her toes. Amanda’s struggling leg instantly goes limp as the intruder carries her unconscious, bound and gagged body out the back door.