January 17, 2013 — TV Line’s Michael Ausiello went to great lengths to score these 7 spoilers during the Television Critics Association’s winter press tour. So I guess we can forgive him for snagging a photo with the POTUS – even though most GLADIATORS would kill to be in his shoes! Check out the spoilers below: 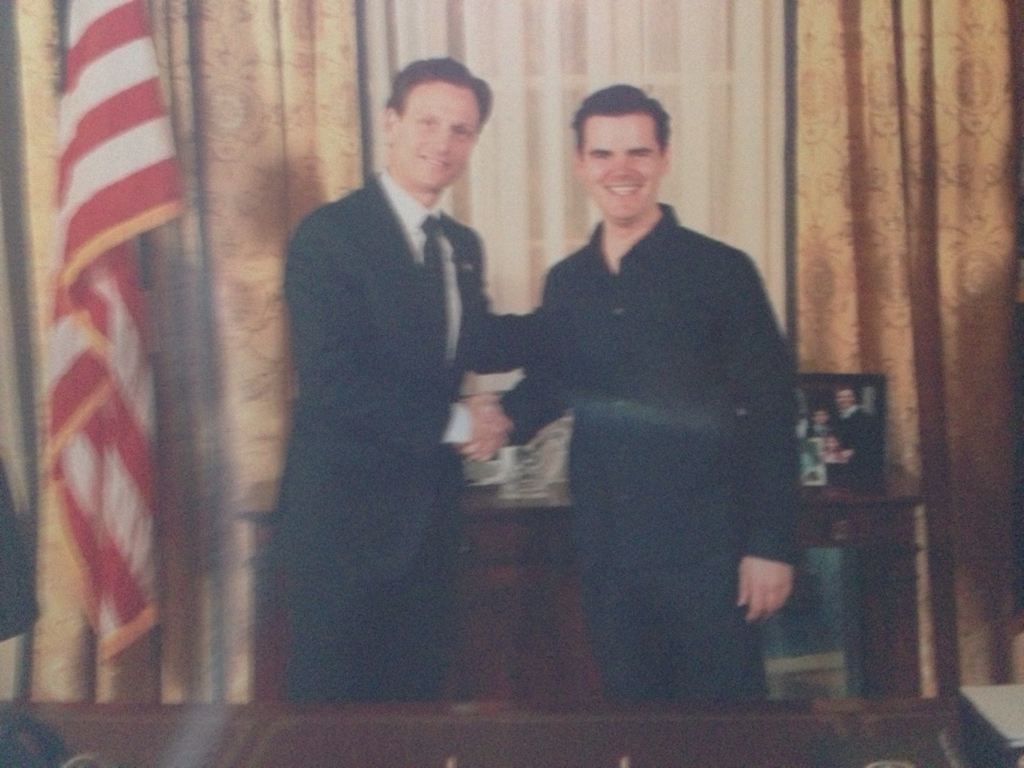 A ‘CRIMINAL’ SNEAK | The assembled press screened next week’s fantastic outing,  ”A Criminal, a Whore, an Idiot and a Liar,” which answers (via flashback) one of the biggest questions hanging over this season.

REWIND | An upcoming episode will reveal “pieces of the flashback [puzzle] that involve Quinn.” (Click here for more on that.)

D-DAY IS IMMINENT | Teased Rhimes of Mellie’s impending bundle of joy: “America’s Baby is coming sooner than you think.”

ALL IN THE FAMILY  | Rhimes confirmed that viewers will “eventually meet” Fitz and Mellie’s teenage son and daughter (who are currently holed up at boarding school). “It will be interesting to see [Fitz] as a father,” she added. “In the beginning, we didn’t see them because I was worried that if you saw him with his children you would really hate Olivia for having an affair with him. Now I’m no longer concerned about that. You’re rooting for them to be together no matter what.” Rhimes also explained, “I didn’t want to do a bunch of stories about Fitz talking to a 12-year-old girl. That was not my plan… yet. That’s not to say we don’t have plans for that happening in the future.”

THE TRUTH IS (ALMOST) OUT | Rhimes strongly hinted that Olivia would soon come clean to Quinn about her “origin.” “I think eventually there’s going to come a time for Olivia where not telling the truth is going to become more of a burden than telling the truth.”

THE BIG ONE | “There’s really interesting stuff coming with James and Cyrus,” shared Rhimes of the show’s somewhat happily-married gay couple, adding, “One of my favorite scenes I’ve ever written in my entire life is coming up with James and Cyrus. And it’s a BIG one. A lot is revealed.”

Posted on January 17, 2013, in Spoilers, Uncategorized. Bookmark the permalink. Leave a comment.