August 21, 2012 — This week’s edition of ‘Ask Ausiello’ courtesy of TV Line News hints at the time gap GLADIATORS can expect between season ones’s finale episode and the premiere of the sophomore season.

Question: Scandal was flawless in its inaugural season. Any scoop on Season 2? How much time will have passed between seasons? —Mike
Ausiello: Though Kerry Washington wouldn’t nail down the exact time jump since Olivia promised Mellie to keep her mitts off Fitz, she did tell Matt Mitovich that Season 2 picks up “more than a month, less than a year” later, with the “Who Is Quinn?” mystery rolling to a boil. “We do find out who she is, but we’re still like, ‘But why? And how?’ All of that,” says the series lead. And, interestingly, some of Olivia’s fellow gladiators are champing at the bit to get the complete story. As Washington teases, “There are reasons why certain people need more answers right away, and other people don’t. Even that’s complicated.” 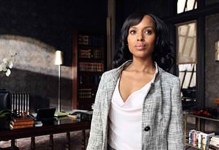